Now that the mystery of my knee pain has been solved and I know that chopping off my right leg is not in my near future, I can move on to other news in my health world. Because you see, when you reach the age of 65, physical ailments drive your life.

A few weeks ago, I had what I’m certain was a bowel obstruction. For reasons that wouldn’t nearly satisfy my (or any) doctor, I didn’t go to the hospital while suffering the stomach pain. I meant to. I planned to, in fact. Bill knew that I was having stomach pain, but I told him to try to get a few hours of sleep before we head to the ER. We went to bed around 10:15; he slept while I watched the time pass on my digital clock. My plan was to let him sleep as long as I could. So at 12:15, I thought, “I will give him another hour.” At 1:15, I did the same. And so on. Finally, around 4, my issue resolved itself and I felt fine. Par for the course; it comes quickly and resolves just as quickly.

Why the surprise and delight, you might ask? Because St. Bonaventure Church is where I was baptized, made my first communion and confession, was confirmed, and went to Mass every Sunday for the first 18 years of my life. What’s more, I attended St. Bon’s grade school from Kindergarten to 6th grade.

The next day, I went online and ordered a St. Bonaventure medal….. 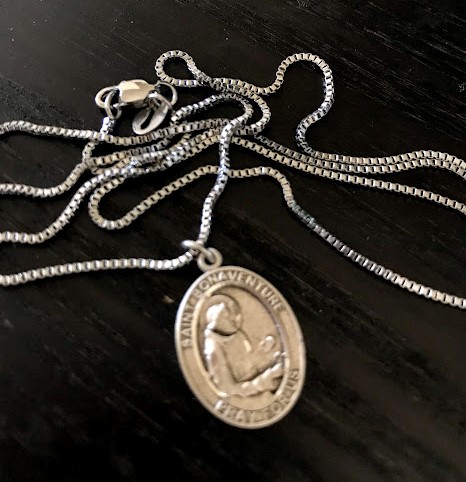 …..and I wear it every day. It reminds me throughout the day to say, St. Bonaventure, pray for me.

Anyway, I considered (and still am considering) buying a St. Roch medal to wear on the same chain as my St. Bonaventure medal. However, I began to think about all of my ailments, all of which have patron saints. St. Alphonsus Ligouri: arthritis; St. Servatius: ankle pain; St. Lucy: cataracts; St. Theresa of Avila: headaches; St. Gemma Galgoni: back pain. The list goes on.

It finally occurred to me that if I start wearing medals for all of my ailments, my load would be so heavy, I would be in danger of a posture resembling a right angle. There used to be a man who would walk around our Denver neighborhood completely bent over. I always assumed he had a back deformity or severe arthritis. Maybe he was just wearing a lot of medals.

St. Anthony (patron saint of lost items) has always been my go-to. Well, Anthony, move over. There’s a new kid in town.

One thought on “Saint of the Day”