I know practically nothing about about football, except that I like to watch it. I never see holding. I can never remember the difference between offsides and encroachment. I just look at which side is cheering. I say this so that you understand that representatives of the ownerships of the Denver Broncos and the Arizona Cardinals did not call and consult me on matters of whether or not to fire their head coaches, and subsequently, provide suggestions on replacements.

Despite my coaching inexperience, I believed it was time for recently-fired Denver Head Coach Vance Johnson to go, and also couldn’t argue with the decision of ownership of the Arizona Cardinals to fire their coach considering they ended up last in the NFL.

Having said that, I will also relay to you my surprise that the Cardinals chose someone with the decidedly millennial name (and spelling) of Kliff Kingsbury to be their head coach. He has a full zero years of NFL experience, and recently was fired for coaching the losing Texas Tech football team. Not a stellar resume, I would say. He looks like he could be on The Bachelor.

We learned yesterday that the Cardinals eagerly selected Broncos cast-off Coach VJ to be their defensive coach. I don’t know. Maybe they know something we football plebes don’t know.

When I heard the news about the hiring of Vance Johnson, I couldn’t help but text my brother — a loyal, if disheartened, Cards fan: Vance Johnson: Tag, you’re it!

His response?: Gee, thanks.

Being his older sister, I added: If there is a beauty contest, you guys got it nailed!

He quickly came back with Our new slogan instead of “Rise up Red Sea” is “We look good losing.”….. 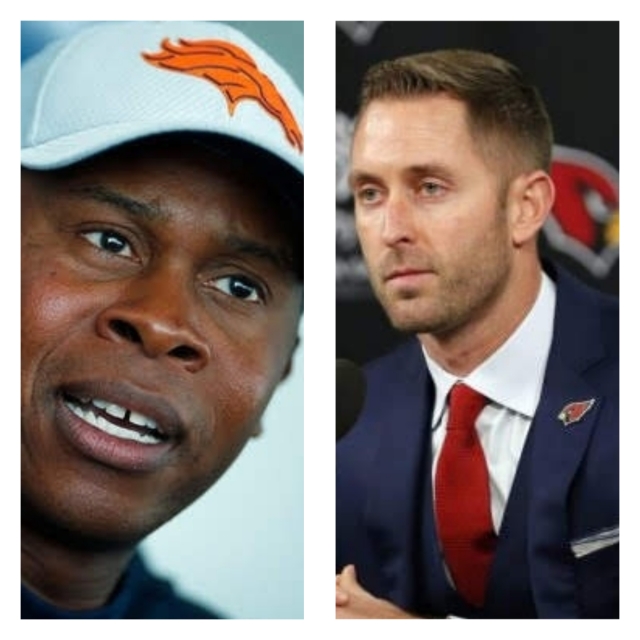 That made me laugh for awhile. Good thing it’s only football.