Today — perhaps even as you read this blog post — the final portion of our remodel project is being completed. We are getting our new carpeting for the bedrooms. The remodel — much of which we’ve done ourselves (and when I say “we” I mean Bill) has been going on since May 2017. Of course, for a several months of that time, we were in AZ. Still, for 13 or more months, we have lived with the sound of pounding and the unending layers of dust on the furniture and grime in the air and the smell of paint and varnish.

There is more we could do, of course. The cupboards in the family room and the kitchen should be replaced. The kitchen lighting needs to be updated. BUT WE’RE DONE. FINISHED.

Throughout the remodel, people kept asking us if we were preparing the house to put it on the market. It’s probably what we should do, since the prices that homes in our neighborhood are selling for are astonishing. But that’s not why we undertook this project. I have said many times before that we have lived in this house 26 years, and for the most part, we have done only a wee bit of updating. It was built in 1972, and much of the home looked like it could have been occupied by The Brady Bunch. All it needed was to hear Electric Light Orchestra playing in the background.

My housing needs are simple. I don’t need expensive furniture or contemporary lighting or bathroom sinks with spigots that look like a waterfall. But we both know that the point at which we will be prepared to sell this house gets nearer all the time. It may be five years from now; it may be 10. But neither of us wanted to be placed in the position where we needed to make some of these updates just to make the house marketable, and not be able to reap the benefits. So we bit the bullet and did all that we felt we should do.

The carpets were left for last. It appears that it will be a simple matter. All we were responsible to do was make sure electronic equipment was disconnected and there was nothing on the closet floors. Boom. Done.

One of the benefits of any remodeling, however, is that it requires you to come face-to-face with all of the extraneous crap that lives in your house. As I went through my closets, I found clothing that not only would only be appropriate at an above-mentioned Electric Light Orchestra concert, but which I wouldn’t ever dream of being able to fit into even if there was a time warp.

And frankly, as I threw away shoes after shoes (all of them too worn out to even give to Goodwill), I felt a sense of freedom. I haven’t seen my bedroom closet floor in a decade. I was even able to finally throw away a pair of slippers that I retrieved from my mom’s closet after she died in the mid-90s, slippers that I never wore even one time because they were too small. Every time I would go to throw them away, I simply couldn’t. But yesterday I heard my mother’s voice in my head telling, “Oh for the love of God, toss them in the trash!”….. 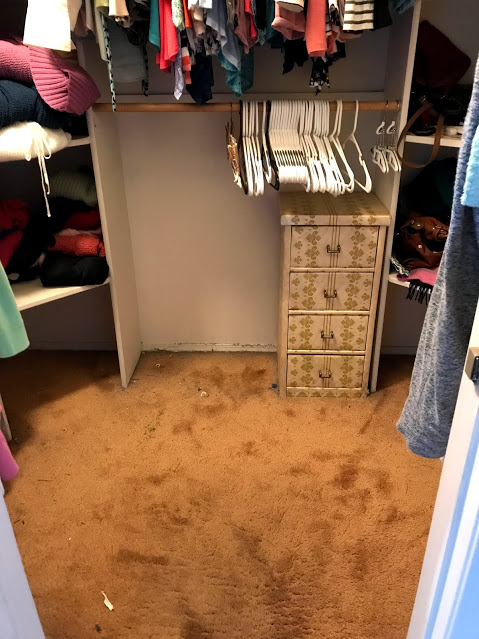 Can you imagine that someone could hang onto caramel colored carpeting for so long?

Our upstairs bathroom currently holds just about everything we previously had in our closets, and more, at least until the end of today….. 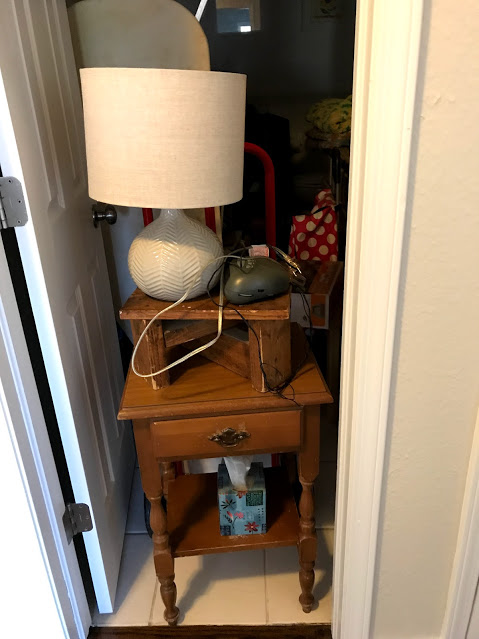 On a more pleasant note, I got my Christmas trees decorated this weekend, and Bill put out his train, something he hasn’t done for over five years. Cole will have a lot to say about this train….. 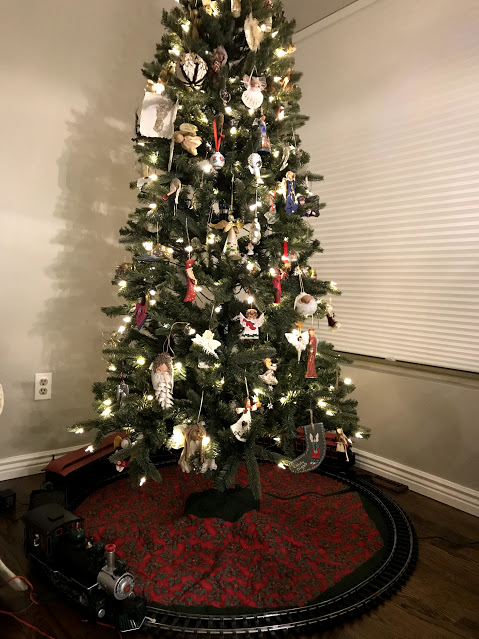 …..and we watched the Broncos beat the Pittsburgh Steelers while eating Court’s homemade turkey noodle soup, made from the carcass of Thursday’s bird.

Best of all, by the end of today, I’m going to not only have beautiful new carpeting, but I will also be done with construction. Hallelujah!

One thought on “The End of an Era, Or So It Seems”