Two Down
Among my contributions to our Thanksgiving table are the pies. While last year we had a cast of thousands at our Thanksgiving table, we are a reasonable number this year. Nevertheless, I am making six pies — three pecan, two pumpkin, and an apple. I will make the pies today at some point, but I made my crusts yesterday. Here’s what I learned about myself: I can make two batches of double pie crusts before I turn stupid. The third required a total dump-into-the-trash-can-and-start-over. My mistakes were ridiculous, with leaving out the shortening being perhaps the dumbest. Furthermore, when I disgustedly stormed outside to our big garbage can and dumped the entire contents into the huge but empty can, I realized that I had also dumped the blade to the food processor into the can. It required a rake to get it out. But the crusts are happily sitting in my freezer from where I will soon remove them and begin pie-making activities. Maggie Faith has promised to help me…… 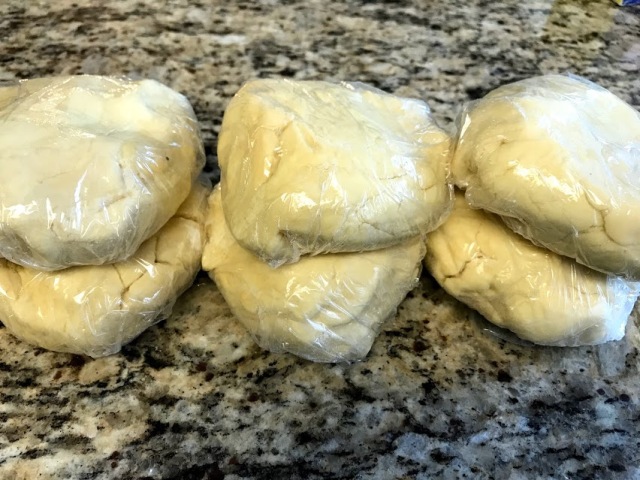 But Then There’s This
Yes, she promised to help me, but her maternal grandmother is looking considerably more fun than I am these days. Over the weekend, Grandma Lynne brought home her new puppy — a Toy Schnauzer they have named Piper. I say they, because the grandkids have full-out taken possession of the dog, up to and including naming rights. They are on Fall Break, and spend every waking minute loving on the dog. And wouldn’t you?…..

Betsy Ross
The past couple of weeks that we spent in Phoenix were not among the most restful we’ve ever had. We had the problem with the cannula inserter. Then, we were hit with awful colds. Making it a trifecta was the fact that Bill ripped the bag he uses to carry his pump as he was getting out of the car. But never fear. Bill-the-Tailor to the rescue. He simply sewed himself another bag…..

On the First Day of Christmas
I am hoping to begin putting out some of my Christmas decorations this afternoon between pies. Yesterday Bill helped me put our evergreen wreaths on the door. Sometime in the next few days, I want to get lights on our bushes outside and both of our trees up and decorated. The best laid plans.