One day, a few years ago, Bill and I drove over to Dave and Jll’s house, where they were hosting the family for dinner. We pulled up, and Dagny came hurrying out of the house with a smile on her face.

“Uncle Allen is coming for dinner, and he’s bringing a GIIIIIIRL,” she said, grinning widely.

“He’s WHAT?” Bill and I exclaimed. There was good reason to be surprised. It had been quite some time since Allen — Bill’s eldest child — had brought a giiiiiiirl to meet the family. None of us presumed that he didn’t date; we just all knew that he was very private. For him to bring someone to meet the Fam, it must be serious.

Emma — the giiiiiiirl — is French. Not simply of French descent; she was born and grew up in Paris, an only child. She came to the United States a year or so previously as part of a relationship that didn’t work out in the end.

Allen spent four years traveling around Europe after he graduated from college. He knows a number of foreign languages, but French is definitely the one which with he is most comfortable. He has worked diligently to stay fluent, and for that reason, he was a member of a French Club. It was in this club where he met Emma, who was there to learn English. Do-si-do.

The weeks, months, and years went by, and Emma became like a part of our family. We learned that she is a lovely woman, who, despite being an only child, seemed extraordinarily comfortable with the pandemonium that can be us. She is funny, and smart, and oh-so-lovely. She has taught all of us hillbillies to greet one another in the French way — a kiss on both cheeks. We quickly learned to love her very much, and all secretly kept our fingers crossed that this would be THE ONE for Allen.

A few weeks ago, Allen sent us all a text message. Would you guys be available on September 9 for a party? Emma’s parents will be in town and we’re looking to have a garden party at the studio.

Dum-dum-duuuuuuuum! We simply knew this was it. They were going to announce that they were getting married. We were all certain of it. Well, except for Bill, who — being male — simply thought it was a garden party in honor of Emma’s parents. As if Allen has garden parties all the time.

I will make a long story, well, at least shorter by telling you that a week or so ago, Allen and Emma announced to us NOT that they were getting married, but that they had, in fact ALREADY GOTTEN married. After our initial shock, we couldn’t have been happier. After all, it is Allen we’re talking about. For us to expect a traditional wedding was unrealistic. And see above. We love Emma.

Yesterday evening we did, in fact, go to a garden party at the Skytheory Studio, where we celebrated the marriage of Allen McLain and Emma Glass, along with her parents who are visiting from Paris. They had guessed the truth long before we did, and traveled all the way from Paris, France, to see the truth for themselves.

Emma and her mother and father, who came from Paris for the special celebration.

Allen and Emma, with his sister and brother, Heather and Dave. 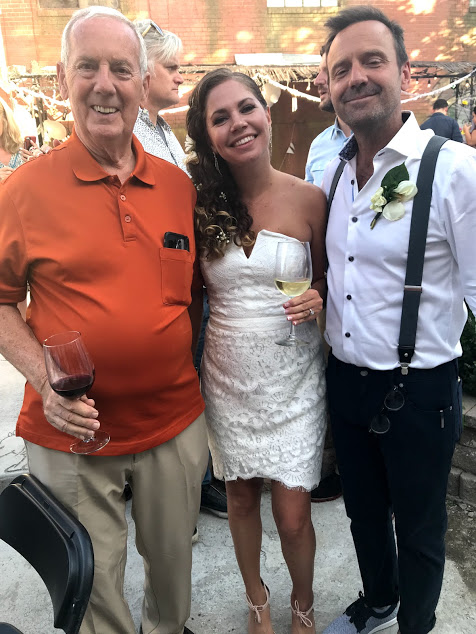 The proud father poses with his son and new daughter-in-law.

Getting ready for the celebration.

Allen and Emma, with their nieces and nephews.

May they live happily ever after…..