Having lived in Colorado for the majority of my life, you would think that the sudden weather changes in the spring wouldn’t catch me off guard. There are probably meteorological reasons for the crazy weather. Downdrafts from the Rockies to the west. Barometric pressure that results from the dry air of the Colorado plains meeting the chinook winds of the foothills. I’m making up stuff (and not very learnedly). But I know that Springtime in the Rockies is more than just a 1937 Bette Grable movie. Even so, yesterday’s crazy weather took me by surprise.

It rained Sunday night. A nice steady downfall for a period of time for which I cannot vouch because I ended up putting ear plugs in my ears because the person lying next to me was himself emulating thunder. When I awoke in the morning, the temperature was pretty chilly, but not chilly enough to have bothered my plants. The skies were partly cloudy.

Bill left home early to do that thing called work. Somewhere around 8:30, the temperatures began to rise, and I decided it would be a good day to buy some more flowers. It was after Mothers’ Day, after all. It was safe to plant. I was, in fact, at the garden center when Court texted and offered to come over and do some work in our yard. I was thrilled to accept his offer. Keeping Bill from doing work around the house and/or yard is a constant challenge, but one I embrace in my never-ending effort to save his back. Any work done by Court – or anyone else, for that matter – is work that Bill doesn’t do.

Now, here is some important information: May and June are typically months where you can expect to see violent weather in Colorado. There are thunderstorms with strong lightning, tornadoes, high winds, hail ranging from pebbles to golf balls. But that did not stop me from planting my petunias in my front garden box. Nope. I carefully placed 12 purple and white petunias into the dirt that Court had just poured into the flower box.

The weather forecasters had predicted rain for the afternoon. Sure enough, sometime around 11 o’clock, the clouds started pouring in….. 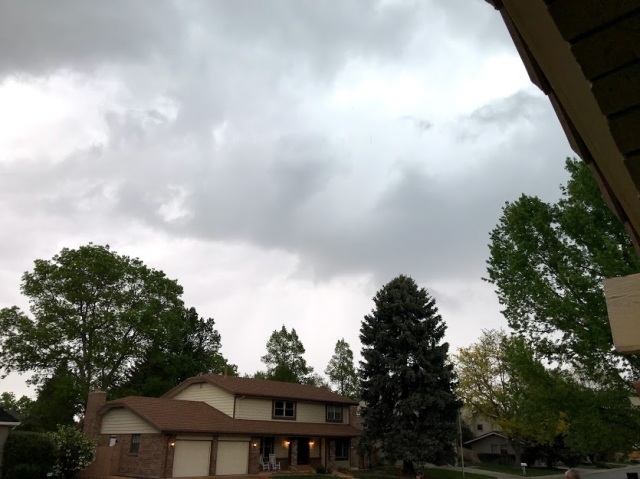 Did the dark and swirly clouds make me nervous? Nope. I suggested we go to lunch. Bill arrived home just in time to join us.

By time we finished lunch, the sky was black and it almost looked like evening had fallen. Raindrops began falling, lightly at first. Court and Bill began scrambling to get the garbage bags full of yard debris to the curb since today was a scheduled “extra bag day.” Those are the designated days when you can have up to 10 extra bags of garbage hauled away. In the spring, you don’t want to miss a single opportunity.

By time they finished dragging the garbage bags to the curb, it was raining hard. And within minutes, it was a virtual downpour. Almost on cue, the hail began….. 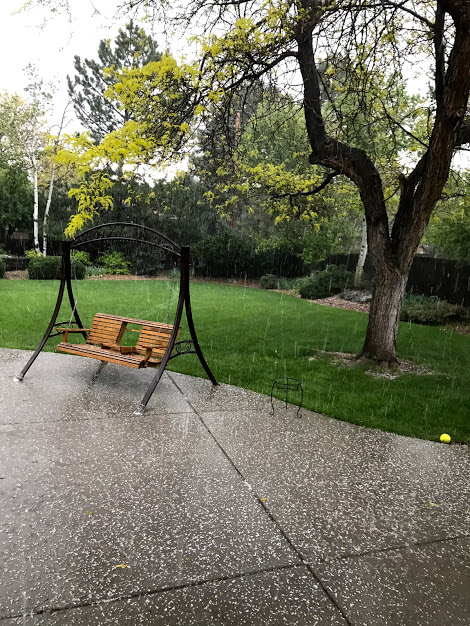 And I began dodging hailstones while pulling all of my potted plants under our covered patio. It is because of God’s good grace that I had the sense to have already covered my garden plants the night before in anticipation of severe storms.

It rained like Noah’s flood – for about 15 minutes, just long enough to create a little river running down our street….. 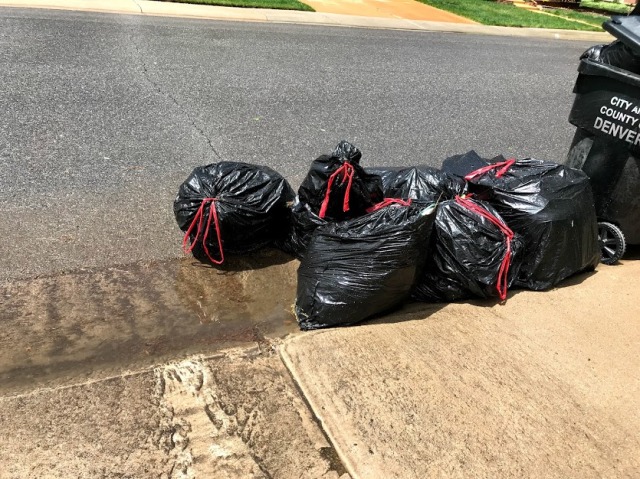 And then, just as quickly as it had come, it was over….. 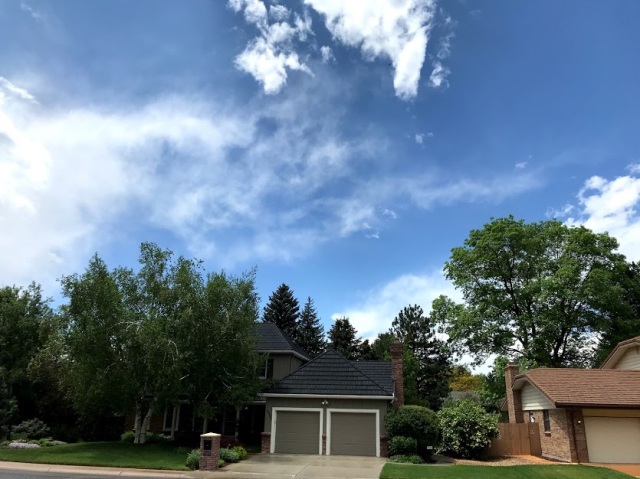 When all was said and done, I lucked out. The hailstones were no bigger than pieces of gravel. My petunias survived the deluge….. 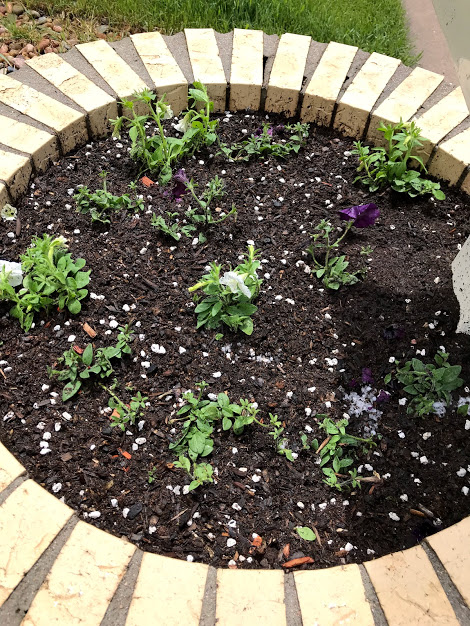 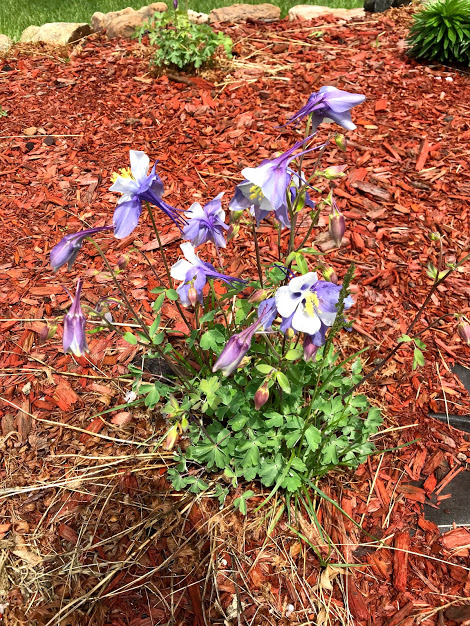 All that remained to prove that a storm had passed through were several piles of hail….. 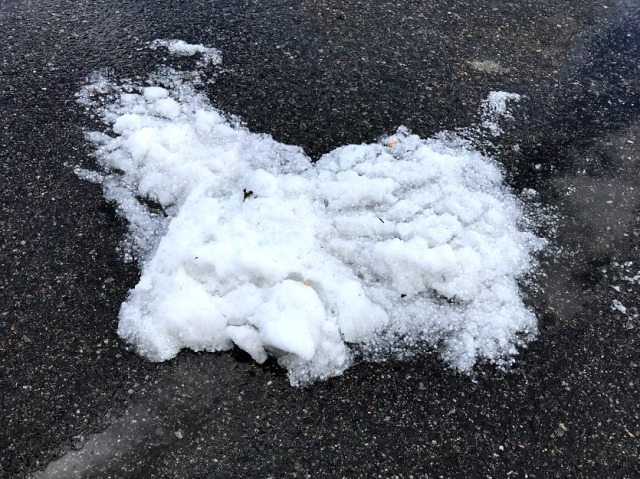 I brought my plants out from their shelter and uncovered the others. Until later today, when we’re supposed to get more severe weather.

Springtime in the Rockies….. 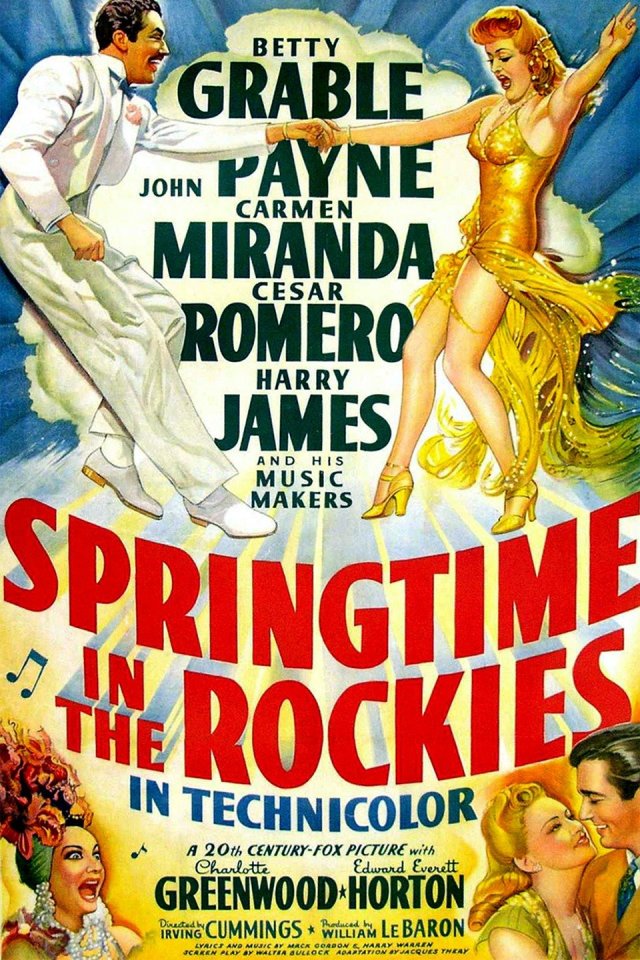 One thought on “Here and Gone”