The other day I was cleaning the house, and began listening to the new song from Luke Bryan called Most People are Good. Playing that song wasn’t perhaps the smartest thing in the world to do, because that happens to be one of those songs that runs endlessly through my brain at night, beginning just as soon as I wake up, even if it’s just to turn over. I then lay awake for two hours, perhaps because some of the words won’t come to me; it might be because I can’t remember who sings the song; I could be wondering if there is any living human being with whiter teeth than Luke Bryan’s; it might simply be because I’m trying to figure out if it’s true that most people are good. I hope he’s right.

I love the verse for many reasons, not the least being the line about Friday nights looking better under neon or stadium lights. As I listened to the song that day, it suddenly struck me that there are likely many people, most who have never lived in the south or the midwest, who don’t understand why Friday nights should be under stadium lights.

My husband, for example. Bill grew up in Chicago. Not in a suburb of Chicago but right in the city itself, on the south side, along with Leroy Brown. He went to his neighborhood public high school, where they didn’t play football on Friday nights. There was a reason that Leroy Brown had a razor in his shoe. So, while he can conceptually understand about Friday night football games, he can’t understand with his heart what high school football means to people throughout middle America.

Because my Catholic high school shared a stadium with the public high school, our football games weren’t always on Friday nights; sometimes they were on Saturday nights. It didn’t matter, because Friday afternoons during football season, the entire school was focused on the weekend football game. The Pep Club decorated the halls and the gym. In the late afternoon, classes were suspended because the entire school attended the pep rally. The players were recognized and the coach gave his pep talk to the school body. The cheerleaders led the crowd in school spirit calls. Go Shamrocks! 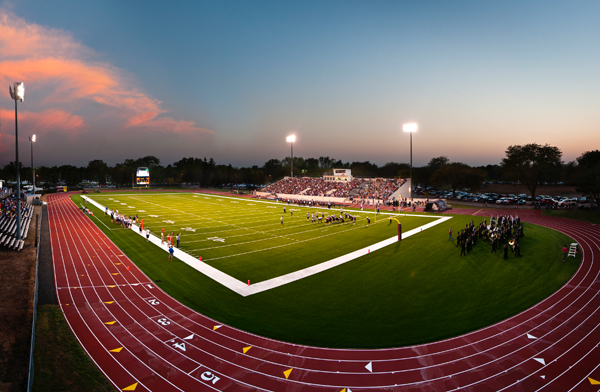 The night of the game, it wasn’t just the parents of those playing on the field who looked on, but much of the town. The parking lot filled up early. There were announcers and sponsors and concessions and excitement. Though our school was small, our football team was always mighty.  We were like an episode of Friday Night Lights, without the horrible injury in the first game, thank you God.

And something similar was happening on Friday nights all over Nebraska, and Oklahoma, and Texas, and Wyoming, and Kansas, and Iowa, and all over the south and southeast. Young men were playing their hearts out on the football field, dreaming of playing for the state university, while their family and friends and school pals watched.

I don’t know if it’s still that way in my hometown. Back in those days, football was everything. Now I suspect there are soccer games and baseball games and girls’ volleyball games that capture people’s attention. Still, as I think back to my teenaged years, it was much as it is in this tune that country singer Scotty McCreery sings….

Friday night football is king.
Sweet tea goes good with anything.
Fireflies come out when the sun goes down.
Nobody eats till you say Amen
And everybody knows your mama’s name.
You can see who loves who from miles around
In a water tower town – Swindell Cole / David Lynn Hutton / Tammi Lynn Kidd

2 thoughts on “First and Ten, Do It Again”