There are a number of things that are bad about bowel obstructions, nasal gastric tubes and the danger of death being the most obvious. Less obvious, but nevertheless quite odious, is the fact that they come on unexpectedly and inexplicably.

Bill, who – God bless him – trudges sadly along beside me as I enter the hospital emergency room in great pain, unfailingly asks me, “Why do you think this happened?” Despite knowing that he asks that question because he loves me, my answer is always, “If I knew, I wouldn’t do whatever it is that causes it.” And that’s the truth.

This past Wednesday, immediately upon finishing dinner, my stomach began to hurt. While stomach pain isn’t an everyday occurence for me, it does happen more than I would wish. It has since I had a colon resection in 2011. Most of the time, the pain goes away after a short bout. Two times in the past couple of years, the pain took me to an emergency room, where it then promptly went away. CT scans showed no bowel obstructions in those cases.

This time, the pain was persistent. Finally, at 2 o’clock this past Thursday morning, after I was comfortable that he had gotten a few hours of sleep, I awoke Bill and told him I needed to go to the ER. While he woke up and got dressed, I packed my bag for what I suspected was going to be a hospital stay. This time I was correct. I hate being right.

There is no good reason to be out at 2:15 in the morning. And there is CERTAINLY no good reason to enter an ER at that time of day. It was us, and many, many others who were perhaps in worse shape than I. Or – dare I say it? – on the lookout for pain meds.

If you don’t know that opioid addiction is a national crisis, then you are living in a bubble. But this is the first time my hospital visit placed me face-to-face with the challenges faced by the hospital staff, by non-opioid-addicted patients, and I guess even by those who are addicted. In the past, when I told the front desk that I had stomach pain and a history of bowel obstruction, I was addressed in short order. This time, rather than quickly getting me in front of a doctor or PA and some much-needed pain medication as well as a diagnosis, I was basically told to get in line. They assume everyone coming in complaining of pain is looking for drugs.

I finally was taken to an ER room where they inserted an IV tube (but no IV) and collected blood, but it was nearly two hours before I saw any type of medical personnel. The woman who took my blood told me the name of my nurse, and added that he was at lunch. I naively pictured him standing in the break room shoving some noodles from a cup into his mouth so that he could get to the woman with the bowel that could potentially explode at any moment. Instead, it was an interminable period before he stuck his head through the curtain, introduced himself, and told me he would be back in a bit.

At this point, I took matters into my own hands . “Whoa there, buddy,” I said, as he turned to go. “Does it matter to anybody on this staff that I probably have a bowel obstruction?”

He seemed quite taken aback, as apparently that information hadn’t been relayed to him – or to perhaps anyone past the front desk. He scurried off, promising to see about an x-ray.

He came back rather quickly and told me I was going to be taken down for a CT scan.

“Is there any way I could get something for the pain?” I asked. The answer, I’m afraid, was no. Hello opioid crisis. Meet Kris.

I was informed that no pain medication could be given until I met with a doctor. I understand the reasoning, I really do. Unfortunately, I was three down in line to see the man who apparently was the only doctor on staff at 4 in the morning at a Level 3 trauma hospital in a metro area. Perhaps someone should reconsider the staffing allocation. A PA would have done the trick. Or perhaps the doctor could have made a quick visit just to ascertain that I really was sick. My distended tummy was a dead giveaway.

I had the CT scan, and after I returned, I waited a bit more before I finally saw the doctor. He asked me what part of my stomach hurt, and I told him everywhere. His examination confirmed this. At one point, however, I was rubbing the left side of my stomach out of habit. When I have stomach pain,that is usually where it rears its ugly head. The doctor snapped at me, “You told me it hurt over here,” pointing elsewhere. It did. See above. It hurt everywhere.

I reminded myself that on a daily basis, the doctor meets people faking pain for Percocet. The nurse who inserted my IV tube told me hours earlier that there had been a recent patient who had broken his own leg to get pain meds. But heaven help those of us who really need the medication.

I won’t bore you with much more of my whining. I will tell you, however, that I did, indeed, have a bowel obstruction. I will add that though the lunch-eating nurse (who ended up being the kindest and most understanding medical person I met the entire time I was at that hospital) attempted to insert the NG tube, he was unsuccessful.

“Your nasal passage is too small,” he told me. “You tell them I said that when you get upstairs and they say you need to have a tube. You are in control of your care.” God bless him. I think the tears rolling down my face helped convince him.

Tomorrow I want to tell you what I learned from this visit and what I would do differently. I’m no expert, but medical care is changing daily, and we can learn from each other.

And here’s the man on whom I always lean and who is always at my side when times get difficult. He deserved a day at the NASCAR track yesterday….. 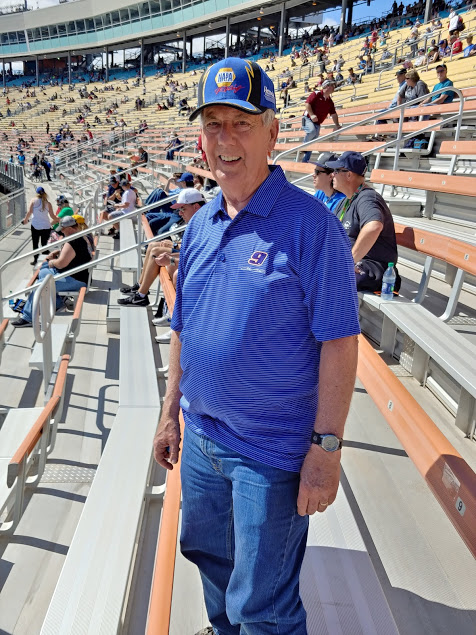 8 thoughts on “It’s Really a Pain”