Premature Reporting?
Bec told me yesterday that when my blog post showed up on her email and she saw her picture, she was afraid I had written an obituary for her, just in case, and accidentally posted it. I assured her that I no obit prepared as I was fully confident in the skills of the surgeon and her own stubbornness regarding her surgery on Monday morning. “The reports of my death are greatly exaggerated,” said Bec and Mark Twain.

Cookie Monster
I have two – count ‘em – two granddaughters who are Girl Scouts. Being the good grandparent that I am, I ordered five boxes of cookies from each. I swore this year I wouldn’t do it, and yet….. 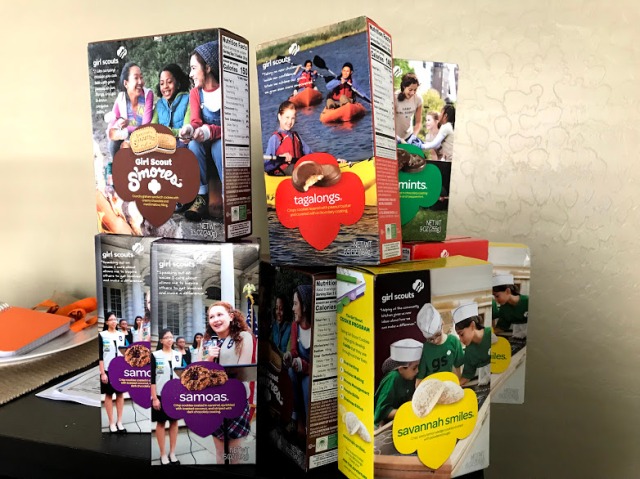 The cookies are particularly onerous because my favorite cookie-eater Bill has given up sweets for Lent. So they sit on top of my desk, tempting me.  My plan is to divvy them out to myself until the weekend, and take any unopened boxes to our church food collection basket. Or maybe since she will be unable to protect herself, I will take a box or two to Bec.

I’m a Bit Chilly
I mentioned that we the owners of this home in Mesa, AZ, had to install a new air conditioner. For reasons I can’t quite explain, it also necessitated the need for a new furnace. It had something to do with, I don’t know, something. Anyway, for the first time since we arrived in AZ in January, I actually turned on the heat yesterday morning. While I promise I’m not complaining (Jen bitterly sent me a screen shot of the Weather Channel’s temperature indicating 1 degree yesterday morning in Fort Collins, Colorado), I still made a pot of chili this week. The highs will only be in the 50s. Bill and I have tickets for the home Spring Training baseball game between the Rockies and the Diamondbacks, and it might be a bit cool. I might even have to wear a sweatshirt over my Rockies shirt.

Pentagon Papers
Bill and I went to the movies yesterday and saw The Post. Never mind that Tom Hanks and Meryl Streep are such incredible actors. The story was fascinating. I was in high school when all of the Pentagon Papers stuff was going on, so I’m afraid I didn’t remember much about it. I will confess, however, that towards the end of the movie, when Katherine Graham/Meryl Streep makes the decision to publish the story and told her naysayers, “This is not my father’s paper; it is not my husband’s paper; this is MY paper now and I will make the decision based on what I think,” I literally let out a tiny little cheer. Very quiet. And I might have pumped my fist in the air. Just a little bit.

Angry Campers
The theater was filled with people about our age. We thought it would be empty because we were at a 4 o’clock showing and we thought people would be heading to their early dinner and the movie has been out for a while, but there was not a seat to be had. At one point, there was literally a yelling match between two men who were not even sitting in the same row. From what I could tell, one man didn’t have his phone turned off and kept getting either calls or texts. The other man yelled at him to turn off his phone. Yelled. A few moments later, he yelled at him again. The man with the offending phone yelled back, “I’m trying to figure out how to turn off my phone.” And you wonder why they get impatient with winter visitors.