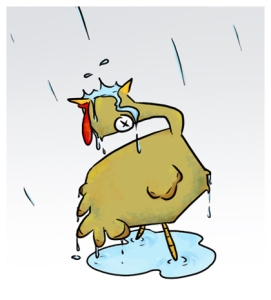 In the way that these things happen, I came across an interesting fact. Apparently, domesticated turkeys are considered by many in the know to be the dumbest animals in the world. An example of their stupidity is that turkeys will apparently often stare at the sky for as long as a minute, even if it’s raining. I’m not making that up. That is a factoid from the Discovery Channel. I wonder if someone from the Discovery Channel actually timed a rafter of turkeys staring at the sky. Maybe they sent the office errand boy or girl. Chet, when you’re finished making the coffee and cutting the donuts in half, would you take this stop watch and time those turkeys outside on the lawn to see how long they stare at the sky? Yes, I know it’s raining. Wear a rain cap. C’mon. Chop chop. Oh, maybe I shouldn’t say chop chop when I’m talking about turkeys.

Yesterday I had more sympathy for those turkeys than I normally would possess. I spent the day doing some last-minute Christmas errands. Buying gift cards. Digging through wrapping paper at Target, disappointed that the only thing left features Spongebob Squarepants in a Santa hat. And I did it with as much energy and intelligence as those turkeys. I seriously felt like I was jogging in mud for much of the day.

The reason is that Bill had to take me to the Emergency Room Sunday night. That’s the bad news. The good news is that there was no bowel obstruction. In fact, they could find nothing at all to cause my stomach cramping. The rather sheepish PA with whom I dealt admitted that despite the fact that we can put a man on the moon, we apparently often cannot find out why abdomens hurt. “We can usuaully figure out what it isn’t, but we have more trouble figuring out what it is,” he told me. Luckily, they were able to rule out All Things Bad and sent me home with something to help with stomach cramping.

But we didn’t get home until after midnight, and my body clock woke me up at 5:15, as usual. So I was plain tired. Hence, the domestic turkey imitation.

I found myself doing many of the things that most annoy me when others do it. Like walking into the grocery store and coming to a dead stop as I tried to remember why I was there, causing a chain reaction of people running into one another. Or walking down the aisle like a zombie and actually walking right into someone. And waiting a beat too long to remember to apologize. And worst of all, stopping at a stoplight and not noticing when the light turned green. I got a not-so-friendly honk from the car behind me, and I didn’t blame him a bit.

One of my stops was at my bank where I asked for five fifty-dollar-bills. “That will be $500,” the bank teller told me. Again, it took me several beats too long to tell him, “No sir, I don’t think that’s correct.” Perhaps he needs a new line of work.

I took a break from my zombie business to have pho at my favorite Vietnamese restaurant. They know me so well that they no longer bring me a menu. They just bring me my small P-5 and a glass of water. Except there was a new waiter, and when he came over to greet me, he smelled so strongly of marijuana that I was quite taken aback. Perhaps that’s why he never brought my bill. Later in the day, I stopped at another restaurant to purchase gift cards. As I waited, a group of 20- or 30-somethingers walked in, and once again I was bombarded with the smell of pot. Welcome to Colorado, I thought. I didn’t really mind, however, because they  probably didn’t notice the vaguely blank look on my face that matched theirs.

By the way, my mother – who grew up on a farm – would take exception to the idea of turkeys being the dumbest animals. She would say – insist, in fact – that the dumbest animals are chickens. She had many pet peeves about chickens, but not the least was her accusation that chickens wouldn’t come in from the rain. Apparently that is also true of their cousin the turkey.

It might also be true of the bank teller, the restaurant patrons, and my waiter.

4 thoughts on “That Time I Was Dumber Than a Turkey”