Sunday afternoon, I was watching an episode of Father Brown on Netflix, once again wondering why anyone would hang out with the good Catholic priest when his friends and parishioners are constantly getting knocked off by one murderer or another despite the fact that there are only 250 people in the quiet English village. The way I figure it, anytime Father Brown calls and asks if you want to hang out, you should say you would love to but you are busy washing your hair that afternoon. And, by the way, I’m leaving your church and becoming Anglican like everyone else in England. Oy vey.  Between Father Brown’s Kembleford, England and Jessica Fletcher’s Cabot Cove, Maine, no wonder young people are fleeing from small towns throughout the world!

Suddenly I heard poppity pop pop, the cheerful sound my cell phone makes when I get a text message. I glanced over and saw that it was from my nephew Erik who lives with his family in AZ. Erik rarely texts me, and I immediately began thinking about what I have in my closet that would be appropriate to wear to a funeral in AZ where the temperature remains in the range of 104 to 106 degrees in the shade. My mother would be proud that I went there so quickly.

Anyway, I read the text and it turns out my sister wasn’t dead, nor was anyone else in our family. Instead, Erik was asking me how I made the black-eyed peas I offer every New Year’s Day so that we can all have great luck in the year ahead. Given several cancer scares, a sister-in-law’s broken back, a couple of surgeries, and several hip failures so far in 2017, I am going to go out on a limb and say that relying on legumes for luck isn’t working. I can’t go out on MY limb, however, as my hip is one of them that is failing.

I responded by telling him how I make my black-eyed peas, wondering all the while how he can be planning on making black-eyed peas when 1) It’s 108 degrees outside where he lives; and 2) His wife and his kids can barely be in the same room with a legume, so he would be on his own eating the massive amount of beans the recipe makes. Perhaps he was planning on feeding an entire flatulent village. Who was I to judge?

I called my sister Bec the next day to let her know that Erik had contacted me looking for the recipe. I called her for two reasons (and I must be in a listing mood today): 1) I wanted her to tell me why Erik was seeking to cook something as, well, hearty as beans in unbearably hot weather; and 2) I wanted to tell her that 10 minutes after I communicated with Erik, I lackadaisically logged onto my Pinterest site only to find recipes for black-eyed peas on my feed.  This is the truth, hand to God. Pinterest is reading my text messages.

The answer to (1) is that no matter where you live, sometime in mid-August, your thoughts turn to autumn. And if you like to cook (as does Erik), you begin thinking about cooking things on top of the stove for a very long time. Autumn/winter cooking is all about braising. It turns out that when Erik was in college, his roommate would go home for the weekend, and the boy’s father would always send him back with a big pot of beans. The young men would eat delicious beans for a week. Erik was feeling nostalgic. Our taste buds have more muscle memory than anything else.

The answer to (2), by the way, is that we are fooling ourselves if we think we have even the littlest bit of privacy left in our lives. So really, when people start getting bent out of shape because they fear a loss of privacy, they might as well realize that the horse has already left the barn. No privacy. None.

Anyway,what this all tells me is that since Erik is jonesing  for a pot of beans and the majority of my grandkids are back in school (the Vermonters don’t start until after Labor Day), the deluge of All Things Pumpkin is about to begin. Lord, make me strong.

Here, by the way, are the instructions I gave Erik (and Pinterest) regarding my black-eyed peas….. 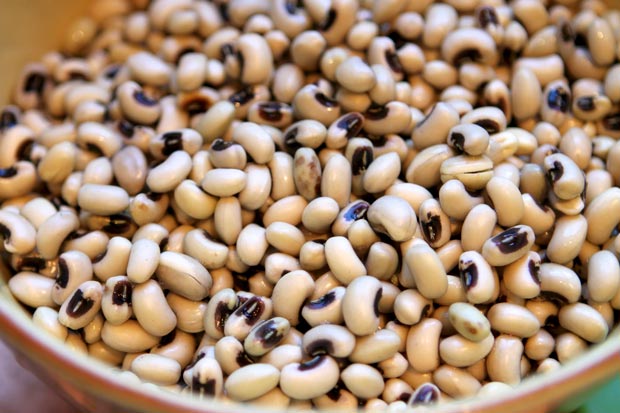 Soak the black-eyed peas overnight (or do a quick-soak ). Place beans, some carrots and celery diced small, a teaspoon or so of red pepper flakes, some diced garlic, a bay leaf, a couple of ham hocks or a ham bone, and enough water to cover into a slow cooker and cook all night long. Don’t add salt until the end.

Enjoy, but don’t expect good luck. And that’s all I’ll say about that.

One thought on “Black-Eyed Peas: It’s What’s for Dinner and Better Than a Funeral”