Do You Need Help, Because I Do
The other day I got a text message from Jll. They say you can’t detect emotion in emails or texts, but I definitely read desperation in this text message: Might Papa need a helper today? Alastair might need an outing. Alastair might need an outing. Now that made me laugh. So I checked with Bill, and he thought about some things with which Alastair could assist. One involved a sledge hammer. Scoooooooooooooooore! The other involved accompanying him to Lowes and helping him carry heavy-ish things. Alastair spent some time breaking pieces of flooring into smaller bits with the sledge hammer, and seemed happy doing so….. 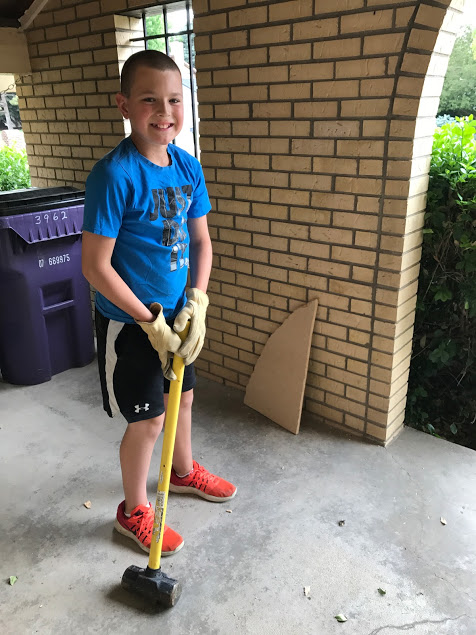 After a bit, however, the big pieces were coming to him too slowly and he was getting bored. Do you think I could go home now, he asked Papa, who assured him it was probably safe to do so.

Death to Rocky the Flying Squirrel
I have been showing you ongoing photos of my garden this summer. Most recently, I bragged at how nicely my veggie pots were coming along….. 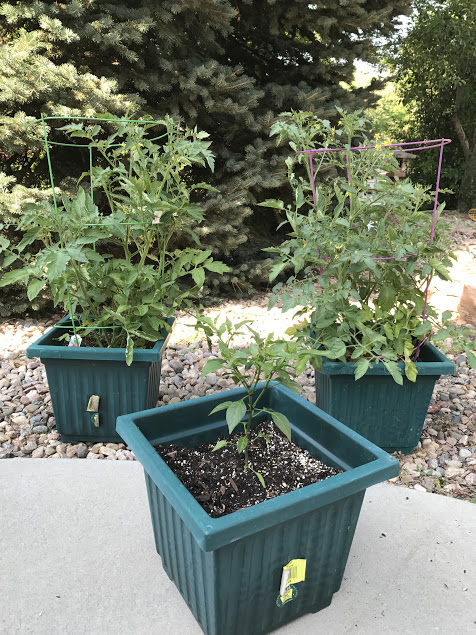 This morning, however, I went out to water my plants only to find this….. 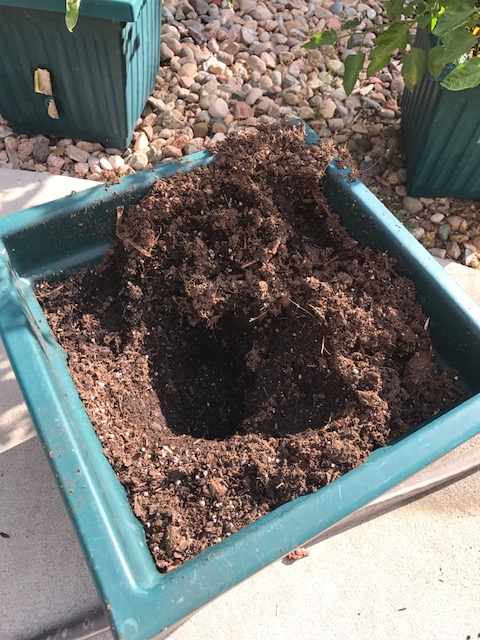 I have been in a fight with a squirrel all summer. He is totally ambivalent about all of my efforts to keep him out of my bird feeders. He is very tame, and when I scream like a crazed banshee to get him away from the feeder, he looks at me with a sneer. He would give me the finger if he had fingers instead of claws. So, while I can’t prove it, I’m pretty sure he is the culprit who dug up my jalapeno plant. This afternoon, I am sprinkling my tomato plants with cayenne pepper. I hope the little bastard gives it a try. Sorry St. Francis of Assisi.

I Wish I Were an Oscar Mayer Weiner
I don’t wish that, really. But I heard a story on the radio yesterday that made me smile. Apparently Oscar Mayer is adding to its weiner fleet, which currently consists only of Weinermobiles…..

It is adding Weiner Drones and Weiner Bicycles. So if you look up one day and see a weiner floating by, don’t panic. It’s simply Oscar Mayer’s Weiner Drone.

Construction Zone
As construction continues on our house, I am finding fewer and fewer places to live. The other day, we had our flooring delivered. In preparation, Bill moved out most of the rest of our furniture from the family room into the living room, the only place I was able to escape up until that time. Now I have about six by six feet of space in which to spend my days….

Who’s Cooking Dinner?
I gave Bec a ride to the airport yesterday evening for the final leg of her journey home from her almost three weeks in China. The woman loves to travel, and couldn’t say enough about how much she enjoyed her trip. But I think she was ready to go home and sleep in her own bed. As we drove to the airport, she said, “I wonder if I will remember how to drive a car or make my own dinner?” Don’t worry; it’s like riding a bicycle. Or a weiner bicycle.