Brown Thumb
So a while back, I mentioned – bragged, actually – that I had purchased some herb plants and since this is AZ and the weather is so mild, I was going to plant them and feast on fresh herbs from my own herb garden while my friends in colder weather were eating herbs from (gack) the grocery store. Well. While the thyme and the parsley have fared quite well, and though the lettuce is thriving to such an extent that I used it for my burger bar last Sunday, the basil has taken a turn for the worse, and cannot be saved at this point. I am therefore waiting until I know the nighttime temperatures won’t get into the 40s, and then I will purchase a new plant and put it in the warm ground…… 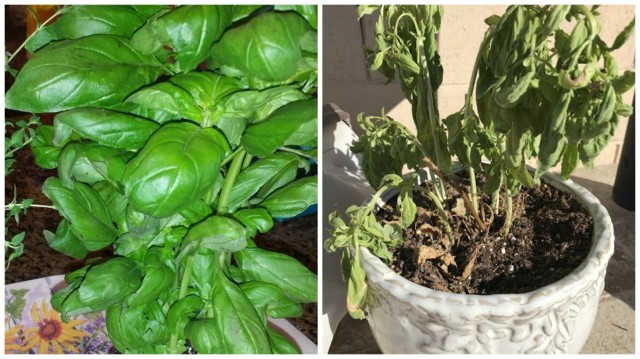 Plant when new – left; What I’ve done to it – right

Toesies
I finally went Tuesday for a pedicure. I hadn’t had one done since November, and my feet were sorely in need of some tender loving care. I warned the nail technician before I even took off my shoes. She seemed to take it all in stride, not even saying one Vietnamese word to the technician sitting next to her. As usual, two things occurred: 1) It felt really good. I mean reeeeally good; and 2) I said a silent prayer of thanksgiving that I never needed to do pedicures as I simply cannot stand to touch feet. Not even my own, really. It would have been a bad career choice.

Point and Shoot
I continue to learn more and more about my telephone. Last night, as I lay in bed thinking about everything I didn’t know about my phone, it occurred to me that I haven’t seen hide nor hair of a GPS. My old Galaxy 4S had a reasonably good GPS that you could turn on or off. But I hadn’t seen anything vaguely looking like a GPS turn-on button on my iPhone. So I mentioned that to Bill yesterday morning as we took a walk in our neighborhood park. When we got to the car, he poked around a bit, in that Bill-like way, and eventually said that the GPS must be installed because the map program knew where we were. So there’s that. I also am trying to figure out my camera. I know how to point and shoot, but I’m pretty sure it can do trickier things than that, but I’m not quite sure what they are. Baby steps. The first thing I need to do is figure out how to make calls and send texts.

Better Than the Cigars
It has been established that Bill is a big fan of the sandwich, and I am not particularly a fan at all. But when Maggie invited us over for dinner to compensate for babysitting duties I will have tonight (she doesn’t need to do that), and told me she was making us Cuban sandwiches, I thought, “Hmmm. That sounds muy bien.” And man, were they ever! She made the shredded pork in her crock pot using a recipe supplied by Jeff Mauro from Food Network, and lined a hoagie bun with the meat, some Swiss cheese, some ham, pickles, and lots of mustard. She told me that you can buy day-old bread from Jimmy John’s for 50 cents, and that’s what she used for the sandwiches. We wolfed ours down, making yummy noises, and each took a sandwich home for lunch today. Scooooooooooooooore!….. 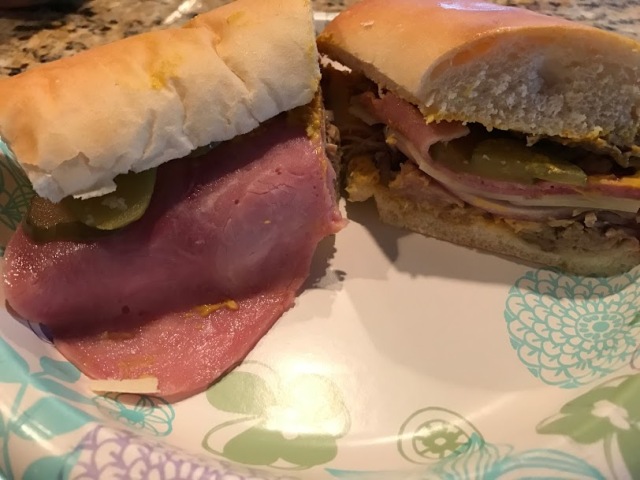