So, one day two weeks ago or so, Court dropped the kids off to stay with me for a bit. “Hey Mylee,” he said. “Tell Nana what your favorite song is now.” Without even looking up from her legos, Mylee told me her favorite song is Help. Now, that caught me off guard. Not because I don’t like that song; in fact, it’s one of my favorite Beatles songs. But I couldn’t imagine how Mylee had become acquainted with it. Well, it turns out there is a show, now appearing on Netflix, called Beat Bugs. The program, starring cheerful computer animated insects, features songs written by the Beatles, with appropriate storylines surrounding the songs. For example, the episode featuring Help is about one of the characters needing his friends’ help to get out of a jam jar in which he fell. When the bugs can’t figure out where to play, they sing Come Together. You get the point. Mylee is constantly surprised that I know the words to every song. I’m equally surprised to hear her singing along with Lucy in the Sky With Diamonds. I can’t wait for season 2. It’s a great way to get the theme from Mickey Mouse Clubhouse out of my mind, even if the bugs are annoying.

Can You Hear Me Now?
In a not-very-shocking turn of events, 2-year-old Cole has his own iPhone. Oh, it’s just a cast-off phone from one of his parents, for which he mostly watches You Tube Kids. Still, he knows how to use it like a pro. When I was getting the kids’ stuff ready to take to my house last week for the four-day sleepover, I placed his phone, along with the girls’ iPads, into their suitcase. A bit later, when I was getting ready to close the suitcase, I realized the phone was nowhere to be found. Knowing that four days without his iPhone would be, well, troublesome, I began looking frantically for the phone. Under furniture, in the garbage can, in the bedsheets. It was nowhere to be found. Finally, when I was seriously about to give up, I opened up one of Cole’s dresser drawers and there it was…… 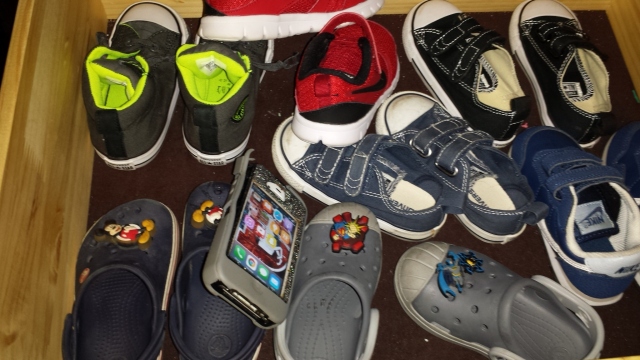 I placed the phone in the suitcase and just as I was getting ready to close it, my cell phone rang. I spoke to my sister for maybe 10 minutes, and then closed up the suitcase and Cole and I headed over to my house, making a quick stop at Walmart on the way. When I unpacked the suitcase, the phone was nowhere to be found. I began to second-guess myself. Did I really put it in the suitcase or did I lay it on the counter at their house? I couldn’t remember. So I drove back to their house to see if it was on the counter. Nope. I began searching once again. I even made a trip to Walmart to see if somehow I had tossed the phone into my front seat and it had fallen out in the Walmart parking lot. Nope. In desperation, I returned to Cole’s house to take one more look. I was about to give up when a thought crept into my mind. I opened the same drawer in which he had put the phone earlier that day and, yes, you guessed it….there it was. It’s apparently where he thinks it belongs.

Back to School
And because I simply can’t resist, here are my grands on their respective first days of the 2016/2017 school year….

Slimy
Finally, I mentioned that we made homemade slime this past weekend, and a few people asked for the recipe. Here it is…

In a bowl, mix a 4-oz. bottle of Elmer’s glue with a half a cup of water. Add food coloring if you want colored slime (and who doesn’t?). In a second bowl, mix one teaspoon Borax with 1 c. water until the Borax dissolves. Add the glue mixture to the Borax mixture and stir together. When the slime begins to take shape, use your hands to knead it until it loses its stickiness. Pour out any excess water. Have fun!