The first thing I want to say is I think that the entire world misspells the word sherbet. I pronounce it sher-bert. Always have. Always will. So that’s how it should be spelled. But it isn’t.

It’s kind of like the town in Nebraska – not far from where I grew up – called Norfolk. Now, if you are from Norfolk, VA, you pronounce it Nu-fuuk. Or something like that. But if you live in central or eastern Nebraska, you pronounce it Nor-fork, despite the fact that there is only one “R” in the word. Nebraskans, however, aren’t just being contrary. The name of the town originated from the fact that it is near the north fork of the Elkhorn River, but it became misspelled somewhere along the way.

I don’t know if something similar happened to sherbet, or if perhaps I’m the only one in the world who pronounces it sher-bert. But the bottom line is, it doesn’t really matter. Because no matter how it’s spelled or pronounced, I was bound and determined to make lime sherbet with Kaiya and Mylee yesterday.

I am a big fan of sherbet. Orange sherbet is my favorite, and if you really want to send me over the moon, give me a dreamsicle. When my father and mother owned the bakery in Columbus, they had an ice cream freezer from which they offered sweet treats. Ice cream bars, fudgesicles, ice cream sandwiches, ice cream drumsticks. I loved being able to enjoy an ice cream treat after school or on a Saturday afternoon. And my choice? Almost every time? Dreamsicles. Well, to be honest, they were really orange push-ups. There was orange sherbet on the top and creamy vanilla ice cream on the bottom. Heaven on a stick. 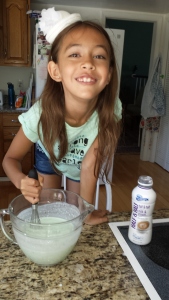 I think that Kaiya looks like Princess Kate in her Fascinator.

During the summer, our neighborhood Good Times offers a frozen custard flavor of the month, and on several occasions, that flavor has been dreamsicle. I would be embarrassed to tell you how often I will drive through and sneak a cup of dreamsicle frozen custard. Bill, I’m going to run up to church to light a candle for world peace, I will say, and head over to Good Times. The orange stain above my top lip when I get home gives me away every time.

Instead of orange, however, Kaiya and I made lime sherbet. Mylee was too busy playing with Play Doh. Through the process of finding a recipe, I learned that the difference between ice cream and sherbet is that sherbet uses half and half or milk as opposed to heavy cream. Oh, and fruit of course. 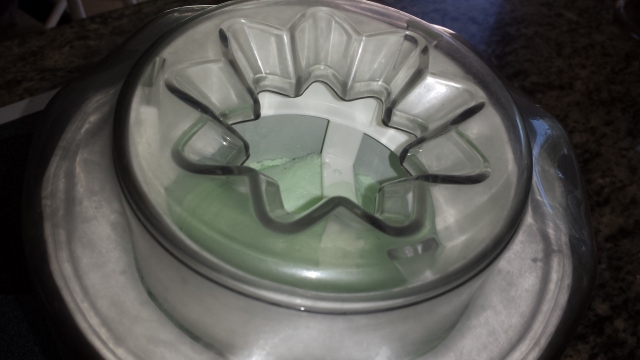 Thirty minutes later, we had ourselves some lime sherbet. 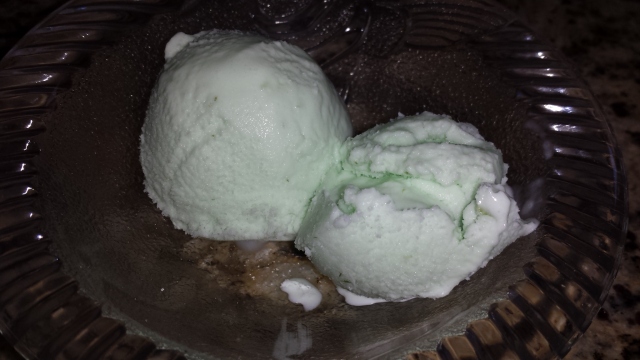 Process
Zest and juice the limes. Combine zest and juice with the half and half and the sugar. Pour it all into an ice cream maker and freeze according to ice cream maker directions. When frozen thick, serve right away or transfer to a plastic container and place in freezer until ready to serve.

Nana’s Notes: To be honest, next time I make it, I will add more sugar. It is very tart, which grown-ups are supposed to like. I, however, like my sherbet to be sweet. I like most everything to be sweet. Also, the recipe doesn’t call for any food coloring. But Kaiya was very sad that the sherbet was so, well, not green. So we did add a few drops of green food coloring. Please don’t call the Pure Food Police.