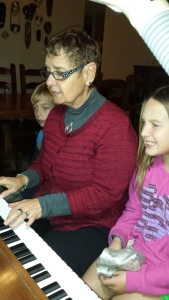 Carter, Bec, and Kenzie perform at the piano.

I took piano lessons for somewhere in the neighborhood of five years. I think I started around the age of 7, and around the age of 12 I finally persuaded my mother that the money being spent was pure, unadulterated futility as I had absolutely no talent. Oh, I could pound out a song and even memorize a few twice a year for the requisite (and greatly dreaded) recitals, but my playing was nothing special.

Bec took lessons and so did Jen. Both had more talent than I, especially Bec (who actually majored in music for about a brief time when she first started college). Mom apparently took one look at my brother Dave and threw in the towel.

We had a big upright piano that lived in our little dining room in Columbus. Given the difference in our ages, Bec would probably have been nearing the end of her lessons when I began mine. I don’t recall having to share the piano for practicing. I do, however, remember practicing. One half hour each day, Monday through Friday. Mom set a timer and started the metronome and there were no exceptions. I hated every minute. Outdoors was calling as I slaughtered a Mozart minuet.

Bec and I took lessons from our second cousin, an older woman named Isabelle (she seemed ancient, but in hindsight, she was probably 40) who was unmarried. An old maid is how the world referred to her at that time. Isabelle had attended a greatly-respected music college in St. Louis, and was well educated and quite skilled. For the most part, we only learned serious music, mostly classical. I became grateful for that later in my life, but as a 7-year-old, I would have preferred more contemporary music. Jen, who took lessons from someone else (and I frankly can’t remember why) learned music that was much more fun.

The result of my five years of lessons is that I can now play Für Elise by Ludwig van Beethoven. The beauty of Für Elise is that it sounds really complicated but is actually quite easy to play. From the time Kaiya was able to walk, she danced to Für Elise as I played it on my piano. She’s 7, and still does.  Lots of twirling. “Please play my dance song,” she will say.

Given a bit of practice, I can pound out Silver Bells and White Christmas at Christmastime. Please understand, however, that I can only play any of this music because of muscle memory. Though I am able to read music, I would be hard pressed to sit down and play from a new piece of sheet music.

Despite this fact, I insisted that we buy a piano when we bought our house in Denver. There is a spot that I’m convinced was designed for a piano, as our spinet fits perfectly. My plan was that I was going to once again take lessons and become somewhat proficient. That was 23 years ago, and I can still only play Für Elise. However, if I ever talked about getting rid of it, three things would happen.

First, I would have to find something to fit in a space that screams PIANO;

Second, I would have to find a different place to put the pictures of my grandkids; and

Third, the grandkids – every last one of them – would pitch a fit because they all like to sit down and pound on the keys. Addie does more than pound because she has actually taken lessons. Kaiya yearns to play, and has memorized a couple of songs that have been taught to her by Addie. The piano desperately needs tuning because, well, pounding. But I don’t get it tuned because, well, pounding. Often there are orange Cheeto fingerprints on the piano keys.

This past Christmas, Bill and Jen and I had dinner one night at Bec’s, and she sat down at the piano and played some Christmas music. She and her grands – Kenzie and Carter – had actually prepared a Christmas Concert as a surprise for their parents and they did a round 2 for us. Singing Christmas carols around the piano brought back such wonderful memories of Christmases past. My family never failed to sing at least one round of Silver Bells and Do You Hear What I Hear? around Christmastime.

One last thought about piano lessons. My cousin Bobbie also took lessons from Isabelle, and it was abundantly clear that she got the bulk of the piano playing talent in the family. Bobbie went on to also study at that same music college in St. Louis, and plays beautifully to this day. She can play more than Für Elise.