In Part 3 of my sister’s series on her African safari, she tells us about their overnight experiences.

A big part of planning for our Africa trip was deciding on hotels.  Our travel agent mapped out a general travel plan and then we needed to decide where to stay on the journey.  I learned that there are different levels of hotel, and that they vary widely in cost.  They also vary widely in terms of amenities.  The first itinerary our agent sent included all top-flight luxury hotels.  The cost was daunting.  The second one she sent was substantially less expensive, but a quick search on TripAdvisor told me they were all much less highly rated.  “Isn’t there an in-between level?” I asked her.  There was, and when she sent the next itinerary, I was satisfied.  We also had the opportunity to upgrade a few for a reasonable price, and we took advantage of that.  But, despite the fact that I was comfortable with our choices and had looked at all of the properties on-line, I still wasn’t sure what they would be like, exactly.  And, in reality, all of them, while very nice, were quite different. 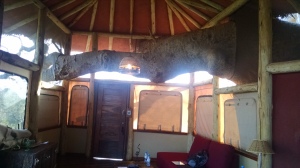 One of the most interesting places was in Tarangire National Park.  This was our one and only treetop hotel, and we were eager to see what that was like.  The reception area was beautiful, and when we checked in we were told that every time we walked to or from our room we would need to be escorted.  When we got to our accommodation we noticed that we would have to climb stairs to reach the door.  Well, of course; it was in a treetop.  And it truly was, with a large branch growing through the room, in fact.  We had an amazing view of the savannah from our patio.  The room was large and tented, but with a door that locked rather than zipped.  When we wanted to leave the room, we used a walkie-talkie to call reception, who then sent someone to escort us.  We arrived late in the day and left early the next morning, so we didn’t have too much time to enjoy the view or the public area, but we were glad to have experienced treetop living even for a short time.

Our longest stay was in the Serengeti, at a hotel called Kirawira Camp.  We were there for three nights, two full days, and after moving from hotel to hotel for our first three days, we were ready to be settled for a while.  Kirawira was a great place for that.  It’s called a camp, and there was a bit of a camp feel to it.  Our room really was a tent, not in a treetop but raised above the ground.  Instead of a

door and windows, we had zippers.  And yet, the bathroom had walls and modern fixtures.  The patio looked out onto the Serengeti…so awesome.  Kirawira also had a beautiful public area, open air, as all of them were.

Our last two nights in Tanzania were spent at Gibb’s Farm, about an

hour away from the Ngorongoro Crater.  Gibb’s Farm, which is a coffee plantation, was very different from all our other accommodations.  Each room was a cottage, and very spacious.  We had a sitting area that looked out onto a patio, two double beds, and a fireplace open to both the bedroom and the shower.  Each evening at dinner, our server asked if we would like a fire built in our room.  We said yes, and by the time we got back to the room, someone was there lighting it.  There was enough wood (from coffee plants) for us to keep it going until we went to bed.  How cozy was that?  Because we were on a coffee plantation, the views from the public area were spectacular, overlooking the coffee fields and the valley below.  We were surprised to see what looked to us like tropical flowers all around the grounds.  We felt like we were in Hawaii.

In some general ways, however, the hotels were similar.  For instance,

all of them had dining rooms that served three meals a day, because everyone who visits is on a meal plan.  There are no other food options, because these hotels are great distances from each other and from anything else.  It’s hard to describe how isolated they are and, in fact, hard to determine how distant they really are from each other, because there aren’t exactly super-highways connecting them.  But, for sure they are not near any towns or even villages; electricity is produced by generators and water is brought in.  They all offered wifi, most often only in the public areas.  And, the wifi was iffy at best.  At one place, we didn’t really have wifi the entire time, because the satellite it depended on was not working.

The hotels were definitely part of the Africa experience, and I’m glad we spent some time choosing them carefully.  And while moving around so much was tiring, I’m also happy that we were able to experience so many interesting variations in our accommodations.  I think I can say with certainty that I’ll never have anything like those views or those rooms again.