I made Bill stop the car so that we could take a look-see. It wasn’t hard to convince him, as this is the man who decided we should attend a circus in Honfleur, France, when we were there in 2008. This man likes to be entertained.

Here’s where the flashback came in. Every year at the end of July, my home town – being the county seat – hosts the Platte County Fair. When I was growing up, it was a big deal for the whole county, as there typically wasn’t a lot to do.

So every year when the fair was in town, my mom and dad would take all of their kids to the fair.

Here were the rules:

We only went at night because, well for heaven’s sake, the lights are so pretty. There’s nothing like the lights of a ferris wheel in the dark.

Mom WOULD NOT BE ACCOMPANYING US on the rides. No way, Jose. Wasn’t going to happen. If we needed an escort, it might be Dad, but more than likely would be Bec.

The only games we could play were those that were not games of chance. In other words, no tossing balls at milk cans, only picking up ducks that have numbers on their butt that correlate with some sort of prize. It didn’t matter if the prize was only a pencil. If Dad was going to fork over a quarter, his kids were going to have something to show for it.

Well, most of the Gloor kids anyway. Three-fourths of them.

Now let me just tell you a bit about the Gloor kids. While Bec – then and now – would not hesitate to bungee jump from Mount Everest, the rest of us are big fat chickens. Still, Jen and I would swallow hard and ride the tilt-a-whirl or the ferris wheel, despite the apparent GRAVE danger. We were game as long as we didn’t go upside down. We trusted in God and Mom to keep us safe.

Then there was Dave. I don’t think he even rode the merry-go-round because the horses might somehow become unattached and fall off the platform. As for anything that left the ground, it was a no-go. “It’s just a matter of time,” he would say, as he still does. A matter of time to what? Why, plummet, of course.

Bill and I wandered a bit around the carnival Saturday, not chancing any of the rides ourselves. Neither Bill nor I would even consider considering riding this danger trap…

Much prettier in the dark (yes, we went back to see the lights at night)…. 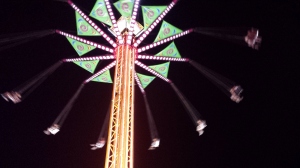 The tilt-a-whirl always made me throw up. That, too, was a no-go….

But the people-watching was great. In particular, I found the people staffing the booths – the carnies – to be fascinating. I can’t imagine their life. While they get to see a lot of the United States, judging from the looks of it, dental benefits aren’t part of their comprehensive benefits package.

Now that wasn’t very nice. I’m sure they don’t envy my life either. Probably never yearned to be a corporate communicator when they grew up, even if it allowed me to keep my teeth. You don’t really need teeth to eat cotton candy.

I just have to tell one more tale on my brother. He won’t mind because he tells it himself.

But, after all, it was just a matter of time.

Here is a picture of the baby roller coaster at this weekend’s carnival….

Perhaps the one at our County Fair was scarier……

This week I’m going to show you how you can cook an entire meal — from appetizers to dessert — on the grill. Being able to cook on the grill is critical in Arizona, especially in the spring and summer when it is really too hot to fire up the oven.

We’ll start with an appetizer — one that happens to be one of my husband’s favorites.

12 slices of bacon, cut in half

Sprinkle each ½ chicken liver with seasoned salt to taste. Wrap ½ slice bacon around each chicken piece and fasten with a toothpick. Place on grill. Grill for 5 to 7 minutes. Turn pieces over and grill another 5 to 7 minutes, or until livers are cooked through and no longer pink inside. Serve hot.

3 thoughts on “A Matter of Time”